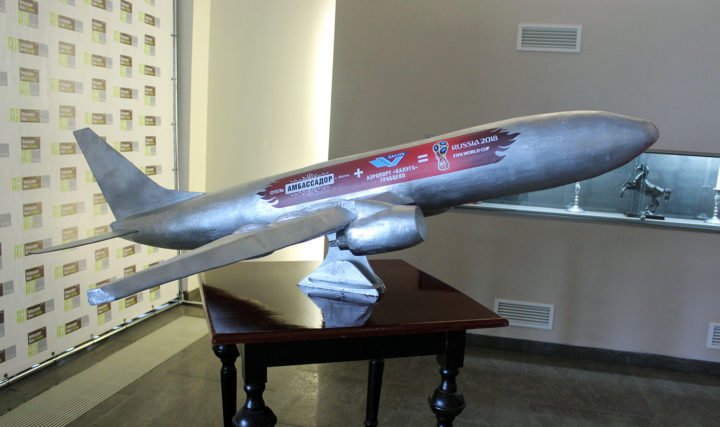 International airport “Kaluga” is ready to host the FIFA 2018

The organizer of this event was the international airport “Kaluga” (Grabtsevo) with the support Of the administration of Kaluga. The seminar was attended by representatives of the Federal air transport Agency-Deputy head of the Federal air transport Agency O. Klim, Deputy head of the airport Department V. Volobuev; First Deputy Governor of the Kaluga region-D. A. Denisov.

We were extremely happy that such an important and significant event was held in our Hotel.

Preparation began in advance: especially for this event, new entertaining objects of the hall decoration were created – a model of the aircraft was made, which personified the pride of our young, regional, but very dynamically developing airport (by the way, it is the nearest neighbor of the Hotel, only 1 km), and also the original table and suit in the style of “Russian lady-buffet”, on the surface of which the so-called “VELCOM-compliments”were beautifully and appetizing.

It was nice to receive words of gratitude from The General Director of the international airport “Kaluga” S. sh.Kutushev and participants of the seminar for the quality organization of the event. Our new friends who came from Kazan, Sochi, St. Petersburg, Volgograd, Kaliningrad, Saransk, Anapa, Gelendzhik, Krasnodar, Grozny, Mineralnye Vody, Voronezh was pleasantly surprised by the level of comfort and service at the hotel “Ambassador Kaluga”. Many promised to visit the hospitable Kaluga land as tourists, after a busy time of an important Championship.